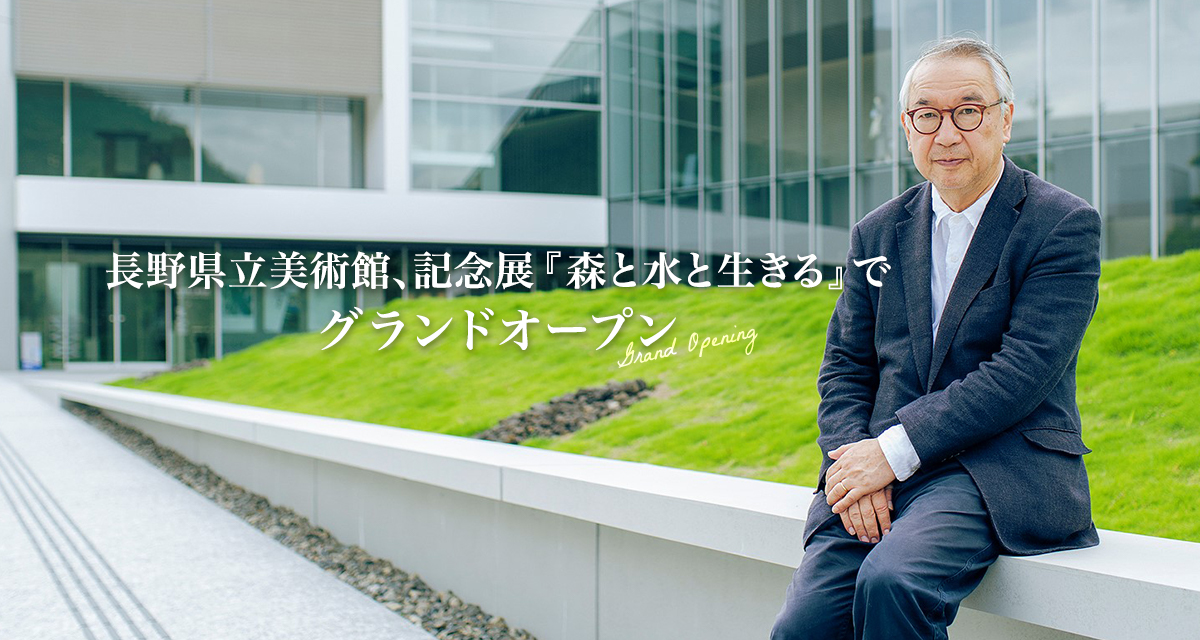 The Nagano Prefectural Art Museum (formerly the Shinano Museum of Art, Nagano) was reborn after a long period of closure due to new construction work.Already from this spring, it has become a hot topic in a variety of exhibitions and the permanent installation of Fujiko Nakaya's work "Fog Sculpture # 47610 -Dynamic Earth Series I-"."Welcome to the newly reborn Nagano Prefectural Art Museum! -The charm of a friendly museum with the keyword" open "-"However, we are telling you about a wide range of attractions, from the museum's efforts to the restaurant menu.The museum was fully opened on August 3, 2021.We will take this opportunity to ask in detail about the Nagano Prefectural Art Museum and the commemorative exhibition "Living with Forests and Water".

First of all, many people may have seen this title and wondered, "What does the grand opening mean now, even though it was open from spring?"Yes, it is true that the Nagano Prefectural Art Museum will start from April 4th in a wide range of fields, including the "Tokyo University of the Arts Super Clone Cultural Properties Exhibition", a commemorative exhibition that revives cultural properties to the present day by making full use of cutting-edge digital technology. We have been enthusiastically developing the exhibition.
So why is it the "Grand Opening" this August ... First of all, let's start with that question.Mr. Toru Matsumoto, the director of the museum, spoke with us. 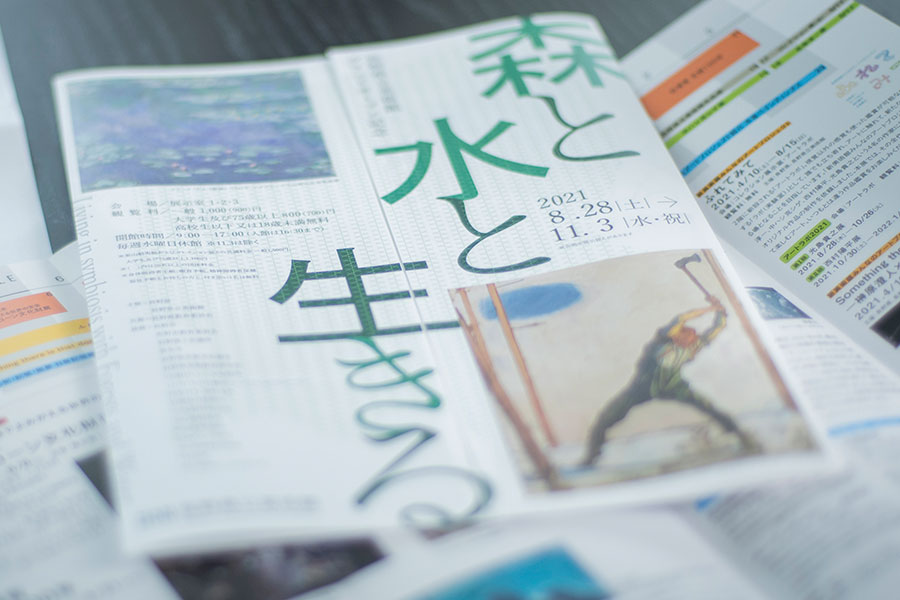 "Actually, for a while after the museum was newly built, chemical substances may volatilize or damp from building materials and concrete, which adversely affects delicate works such as oil paintings, Japanese paintings, and wood carvings. Therefore, the museum itself opened in April, but as a precaution, we refrained from exhibiting delicate works. "

If you ask, the grand opening commemorative exhibition "Living with Forest and Water" is full of works that you can easily understand that the museum is keen, such as world-famous paintings, Japanese paintings made of Japanese paper, and folding screens.

"There is a standard that it is okay if about two summers have passed since the concrete was struck, and based on that, we take care to measure the air many times and report it to the Agency for Cultural Affairs. In the sense that all kinds of exhibitions have become possible after this, August is the "grand opening". "

Behind the word "grand opening", which is often overlooked casually, there was a big mission to protect the work by careful consideration for works of art and thorough maintenance. 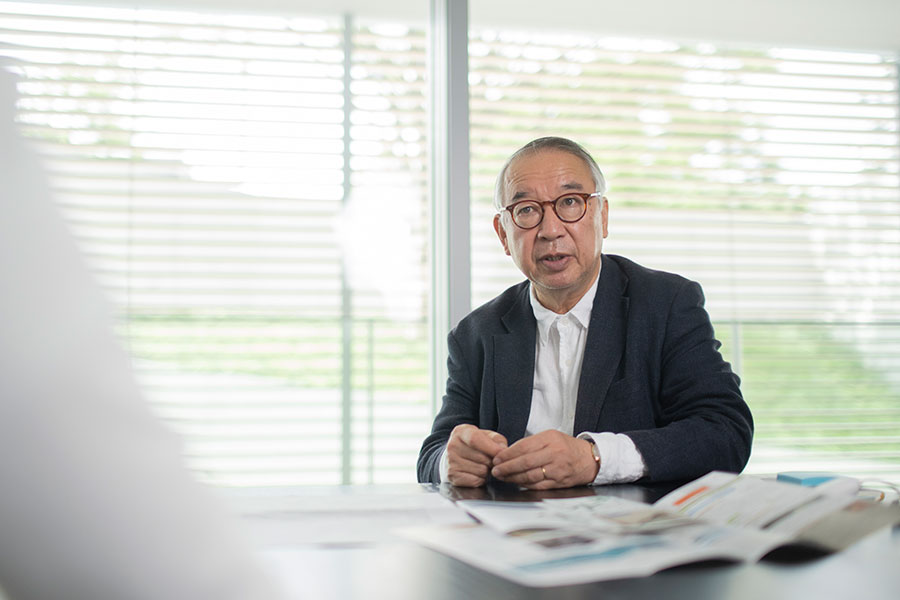 Collection and special exhibition only in Nagano prefecture

Next, let's move on to the collection of works and special exhibitions, which are indispensable for understanding the individuality of the museum.
With the renewal, the Nagano Prefectural Art Museum has opened a "collection exhibition room" (2nd floor) dedicated to the collection of works.The collection of about 4600 items from the time of the former Shinano Art Museum in Nagano Prefecture can now be widely exhibited here.
The director, who describes this exhibition room as "collecting and exhibiting works is one of the core activities of the museum and an important place to show the attitude of the museum," is enthusiastic about transmitting from this place.Regarding the collection, he renewed his desire to expand his works, saying, "We have been collecting works related to the prefecture and will continue to work on them." 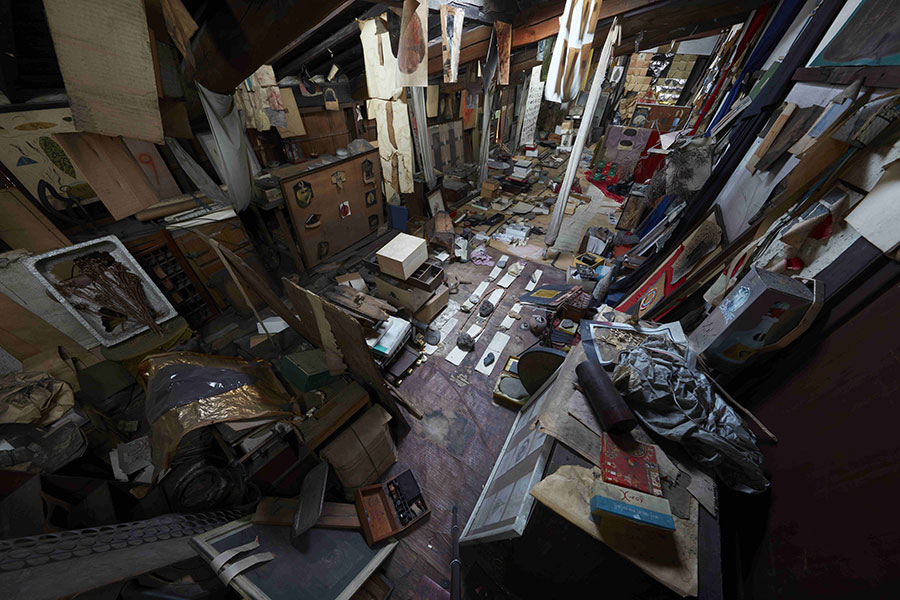 Yutaka Matsuzawa << Pusai's Room >> Taken on November 30, 2018 as part of the "Agency for Cultural Affairs 11 Overseas Dissemination of Contemporary Art in Japan"

In addition, we are trying to show our attitude as a museum in the special exhibition, and it is the "Yutaka Matsuzawa 100th Anniversary" exhibition that is scheduled to be held this winter.Yutaka Matsuzawa, an artist born in Shimosuwa Town, knows his works and performances based on a very unique concept.I feel that the museum's ambitious attitude can be seen in the fact that the solo exhibition will be held at an early stage after the renewal.

This is because Matsuzawa is a world-leading activity in a genre called conceptual art, in which young avant-garde artist Yayoi Kusama has a connection and puts ideas and concepts at the center of his work. A writer who has rarely been taken up openly until now.Due to the fact that conceptual art itself is not well known to the general public, large-scale solo exhibitions at public museums have not been held.

The Nagano Prefectural Art Museum is planning Matsuzawa's first large retrospective exhibition next year.We have a smart plan to open the exhibition on Wednesday, February 100, 4, which is the 2022th anniversary of his birth (originally, it is closed on Wednesday, but it is specially opened. !).There is no doubt that the scale and content can only be achieved by a museum in the local prefecture.Expectations are rising for the art world as well, as it will be an epoch-making exhibition.Behind the decision to hold such an epoch-making solo exhibition, we can see the challenge of the museum, which is enthusiastic about introducing contemporary art, and at the same time, it can be said that it shows the attitude of taking good care of artists related to the prefecture. that's right.

Creating culture in collaboration with museums in the prefecture

Now that expectations have risen for these new challenges, I would like to ask the director what the future "Nagano Prefectural" museum should be.
"Nagano Prefecture has wonderful and unique museums in each area, so I would like to explore ways to further enhance each other, including this museum," said the director, who shows a collaborative attitude. NO is shown for ideas such as “combining” or “integrating” cultures and cultures.

"Just as there are regional characteristics in the prefecture, there are regional characteristics in various parts of Japan, and from the perspective of the world, Japan is also a region. It is strange that they have the same way of thinking and culture, and their uniqueness is It's better to have it. It's a waste if you don't learn from the differences. In other words, diversity ... It means recognizing and respecting the differences. "

The director says that it is a future task for the prefectural art museum to enjoy different cultures in the prefecture, learn from them, and explore what they can do together.

"I think it's important to work together. We'll do one exhibition together, even once every few years. It will take some time, but we'll continue to do that in a hurry. I want to go

About the grand opening commemorative exhibition

Let's hear about the commemorative exhibition "Living with Forest and Water" (August 8th to November 28rd).
This exhibition is a collection of works that express the multifaceted appearance of nature under the theme of "nature and humans."The title of the exhibition, which feels like Nagano prefecture, is also wonderful, but how was the work organized under this title?
"The exhibition is divided into 5 chapters, and the landscape paintings of the mountains will be included from the main chapter 1. However, this time, it is the miso that did not include" mountain "in the title," said the director. Deep comments.

"Mountains are a symbol of Nagano Prefecture, and everyone feels that the scenery of the Japanese Alps is like Shinshu, and there have been many exhibitions on the theme of mountains. This time, I dared not use it. By making it "forest", "Oh? In addition, I thought that the word "forest" would allow you to feel the green itself and the cycle of life of the animals and plants that live there. Naturally. Even the activities of the creatures set in that are included in the "forest". "

It has a broader theme while attracting attention with the twist of "mountains and thoughts and forests". 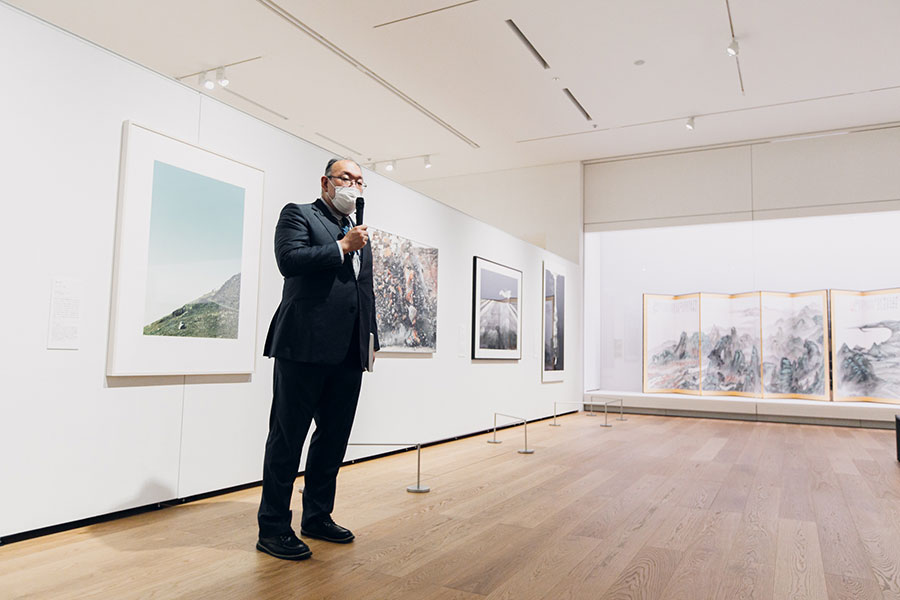 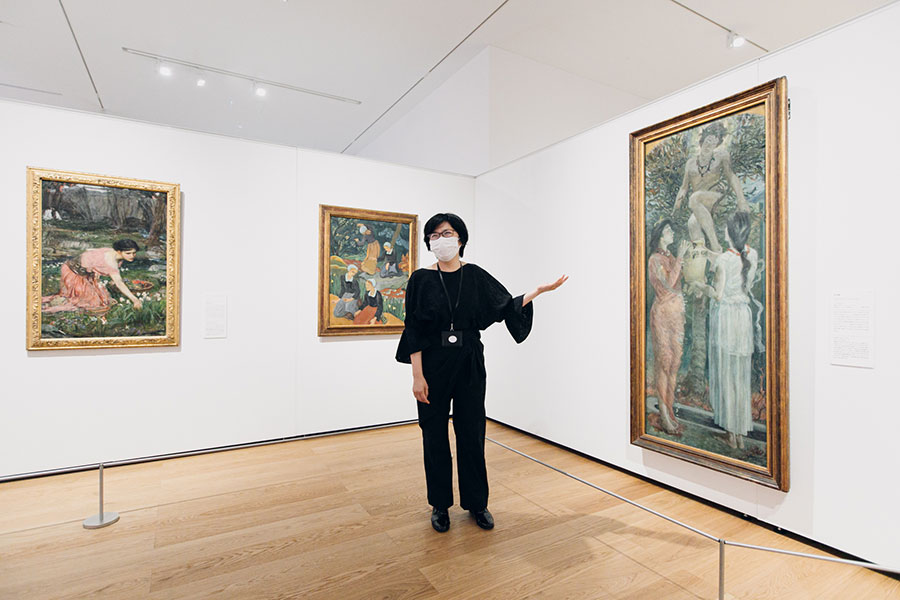 Next, we talked to Masabumi Tanaka, the chief of the curator, and Mayumi Kiuchi, the curator of the exhibition.

"Because it is the first full-scale exhibition held by the Prefectural Museum of Art, we put Nagano's uniqueness into the theme and selection of works. It is carefully selected from the collection of the museum "(Tanaka Arts and Sciences Section Chief)

As the word says, there are big names of Western paintings such as Impressionist Monet, writers related to Nagano prefecture such as Hishida Shunsou, and world-famous artists such as Taro Okamoto who is known for "Art is an explosion!" Widely with popular writers, various times and styles.Many of the works are borrowed directly from active contemporary artists, so some of them visited the museum and exhibited, so you can enjoy the unique development of this museum's space.
"It was a big event for our work, as the curators went directly to museums in various places and borrowed it," recalls Tanaka, the chief of the arts department. It has become.

According to Mr. Kiuchi, one of the curators who visited various places to negotiate and borrow, "This time it was the grand opening of the museum, so each museum was more flexible than usual in the sense of celebration. Therefore, I think that the masterpieces of each museum were gathered. "

In Chapter 4, "The Spirit of Water," an oil painting by Shigeru Aoki, designated as an important cultural property, "Watatsumi no Irokonomiya" (Ishibashi Foundation Artizon Museum collection) is also on display! This work, which is also known as mentioned by Soseki Natsume in the novel "Then", is one of the highlights of the exhibition. It seems that you can hear the voice of art fans saying, "I was waiting for an exhibition where you can see this kind of thing!"This work is released only in the previous term.There are more than 40 exhibition changes in the first and second semesters, including this work, so I definitely want to visit both semesters to enjoy everything.

Kiuchi said, "Each curator has gathered by making the most of his or her specialty, so there is a wide variety. I hope you will discover" Is there such a work? "Even in fields that you have never been interested in." The curator's words made me feel the significance of the commemorative exhibition as an opportunity for new encounters.

From the story of Director Matsumoto and the curator I heard this time, a "new life" that combines a big "defense mission" to protect art and culture and an "aggressive attitude" to tackle new challenges. The appearance of "Nagano Prefectural Art Museum" has come into view.

The museum has attracted many people with its various contents for the past six months from April. After the grand opening in August, the exhibition of works and cultural properties, which are said to be masterpieces, has begun, and the true essence is further demonstrated.The Grand Opening Commemorative Exhibition, which fully mobilizes the specialties of curators, is a great opportunity to feel it from the front.You can't miss it.

Request to prevent the spread of infection when visiting the Prefectural Museum of ArtClick here for more information. 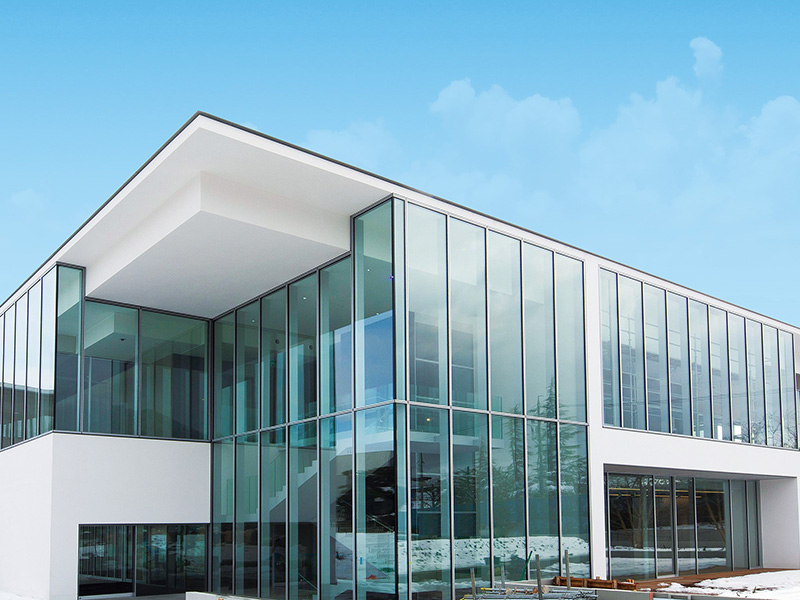