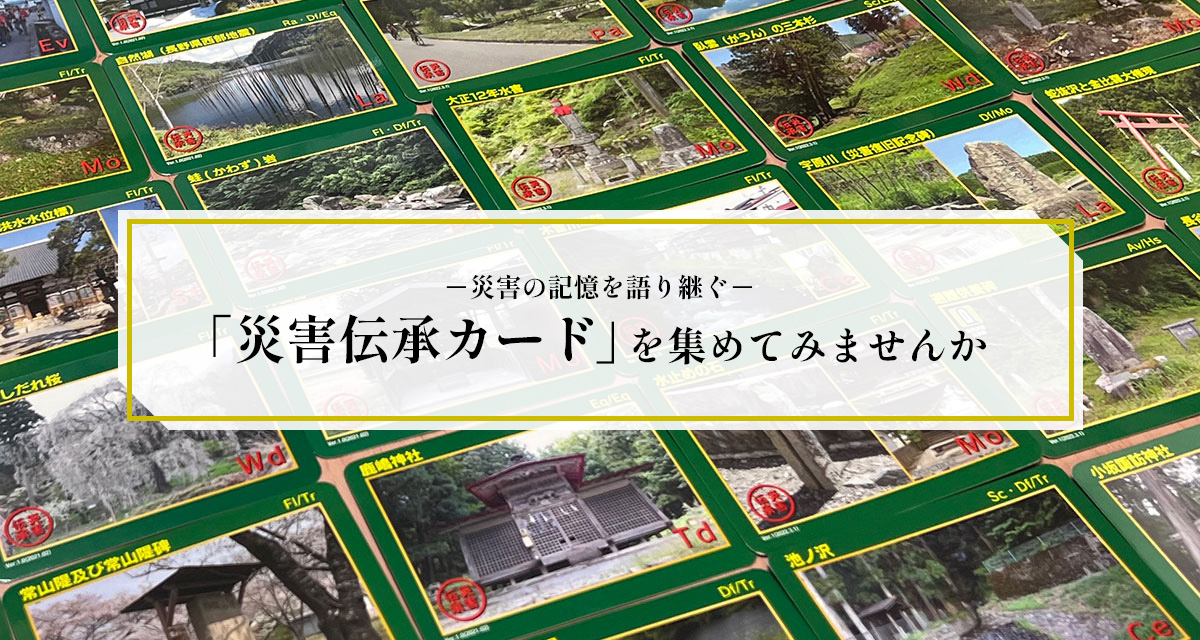 Why don't you collect "Disaster Tradition Cards" to hand down memories of disasters?

Do you know the "Public Distribution Cards" distributed free of charge by public offices and local governments?
A wide variety of cards such as dam cards, manhole cards, power plant cards, and cultural heritage cards.Popular cards are published in books, and exhibition events are held to collect the cards.

Nagano Prefecture also creates and distributes various public distribution cards.One of them, the "Disaster Tradition Card", is issued by the Prefectural Construction Department Erosion Control Section in cooperation with the Nagano Prefectural Museum of History.This card, which has folklore and legends written on it, expresses the wish to spread the wisdom of our predecessors and reduce the damage caused by disasters in the future.We will introduce creative and ingenious initiatives to get more people to know.

Telling about past disasters and getting “disaster prevention tips”

There are 87 types of Disaster Tradition Cards that are the size of a business card.You can get it by taking a picture of the place written on the card or the municipal office where that place is located and showing the picture to each construction office and erosion control office in the prefecture. 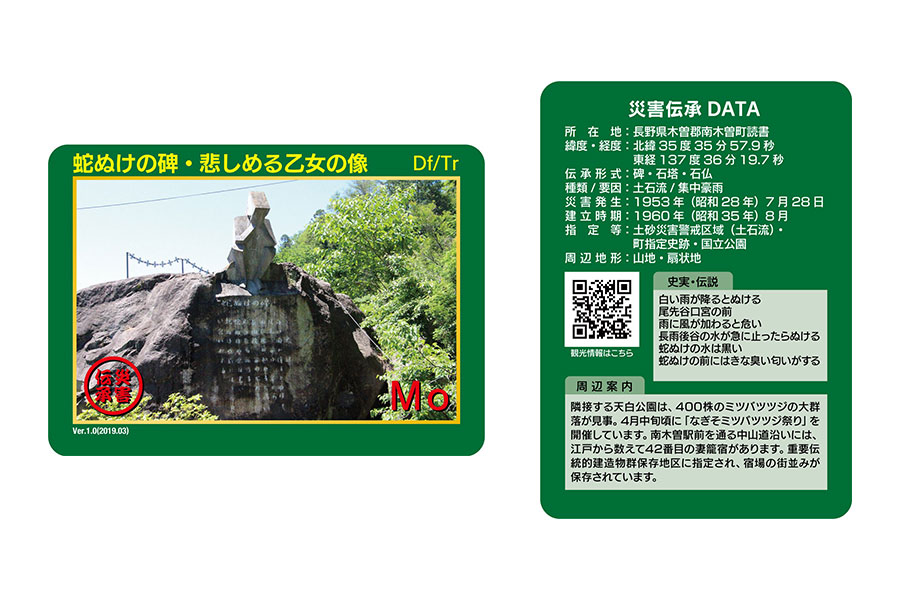 For example, Takayama Village's Weeping Cherry Tree in the Water is a 260-year-old tree that is famous as a cherry blossom spot that attracts tourists and photographers from all over Japan. It is said to have been planted when Kashima Shrine, which was a god, was enshrined.Also, "Sanyori Koyori" is a festival held at two Tenpaku shrines on the right and left banks of the Mitsumine River that flows through Ina City.It is said that it is meant to prevent disasters such as floods, and to pray for a good harvest and the safety of the village.Even places and festivals that you know on a regular basis can be traced back to disasters.

Ayaka Maruyama, who is in charge of the erosion control section, said, "It's easy to understand that stone monuments are related to disasters, but when I saw this card, I learned for the first time that there are such things in local festivals." talk to

This is the first initiative in Japan to use a disaster tradition card.Taking a hint from the pilgrimage, he thought, "I would like to create a plan that allows people to visit places that have traditions of disasters."Searching for candidate locations, inquiring with municipalities, and making selections while receiving information.As the first step, we created 1 types and started distributing them in November 10 types were added in the second bullet, and 2019 types were added in the third bullet, finally covering all 11 municipalities.I feel that the hurdle is a bit high that you can't get it unless you actually visit the site, but that may be the opposite of what tickles the collector's heart.Mr. Maruyama also says, "It seems that there are some elementary school students who have collected several of them, and some elementary school students have chosen them as the subject of their free research during summer vacation."By the way, he has not heard that he has completed it yet. 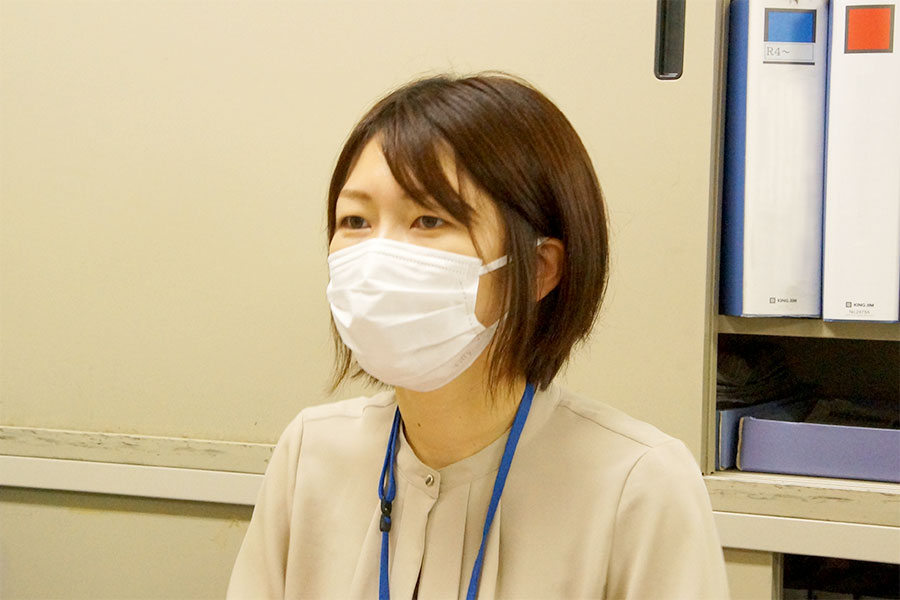 The Sabo Section is responsible for both hard measures such as erosion control, landslide measures, and steep slope failure measures, as well as soft measures such as dissemination of dangerous areas and disaster prevention education so that smooth evacuation actions can be taken in the event of a disaster. “Both hardware and software are important, but hardware has its limits. I think that there is something that can be done on the software side as well. I have,” said Maruyama.

As one of the soft measures, in 2018 (Heisei 30), on the prefectural official website, "Pages to learn from past disasters” was established.We are working together with the Prefectural Museum of History to disseminate information about past disasters in order to use them for disaster prevention in the region.On the page, in addition to content such as "Reading about disaster prevention from a map" and "Introducing place names related to disasters", there is also a "Disaster Tradition Calendar" that can be downloaded. 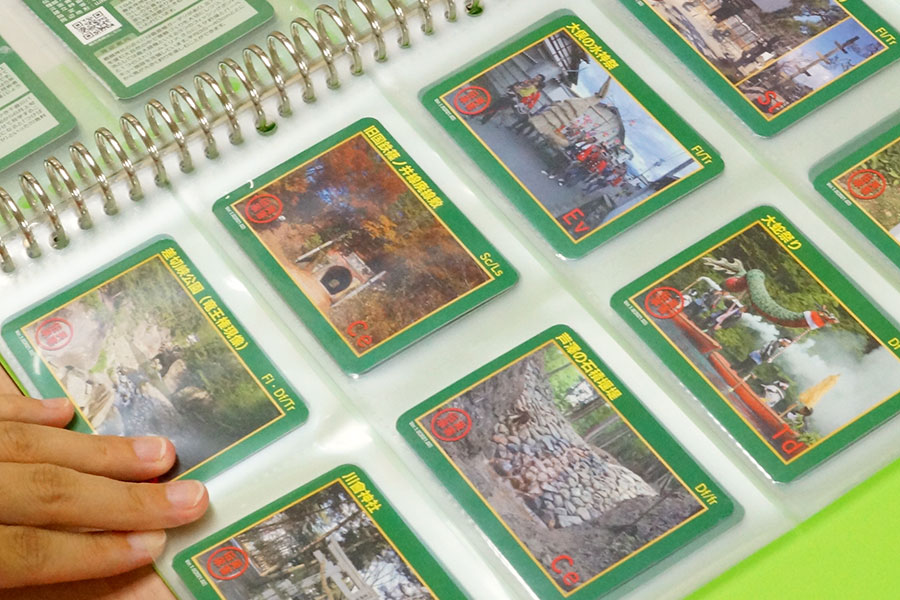 Filed and stored in the Erosion Control Section

“Learning from past disasters will also lead to increased regional disaster preparedness,” says Maruyama.Knowing what happened in this place in the past and what you experienced when you actually evacuated will influence your actions in the event of a disaster.There is also data that the percentage of people who evacuate increases due to the voices around them. "There are 'hints of disaster prevention' left by the ancestors who lived and interacted with the land in the region. Utilizing them should be a disaster prevention countermeasure. It would be great if more people would take the opportunity to visit disaster-hit areas.”

Leaving the fading memories in shape

I took the opportunity to visit Myoshoji Temple in the Naganuma area of ​​Nagano City, which is one of the places featured in disaster lore cards.In October 2019, Typhoon No. 10 broke the embankment of the Chikuma River and caused severe damage.The photo on the card shows the main hall and the "Chikuma River Great Flood Water Mark" that describes the history of flood damage in the precincts.There are 19 records marked on the watermark. 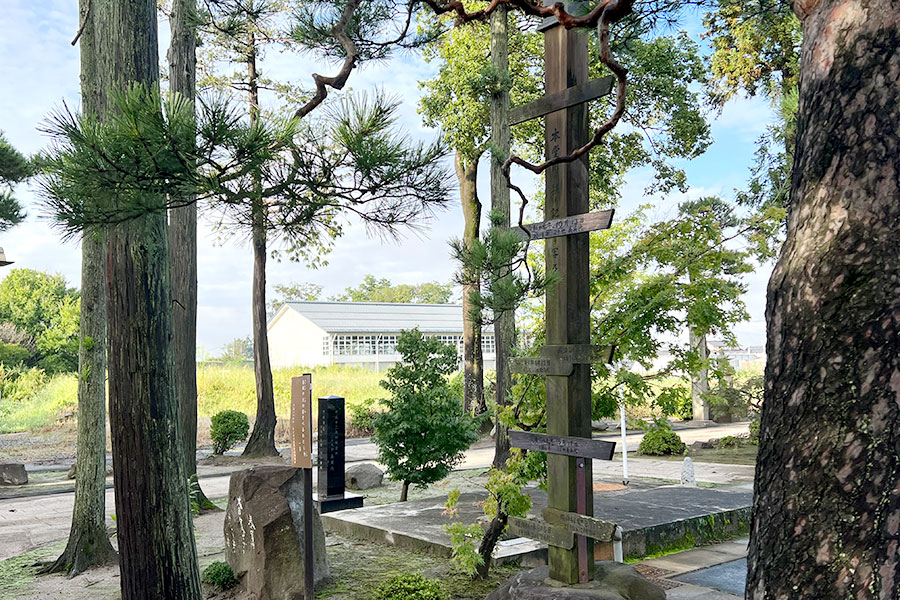 The highest one is "Kanpo 3.36nd Year August 2" at 8 meters.Locally, it is said to be "the full flood of the dog", and it is from the flood caused by the typhoon that hit the Chikuma River basin in 2 (Kanpo 1742).And the next is due to Typhoon No. 2 this time. 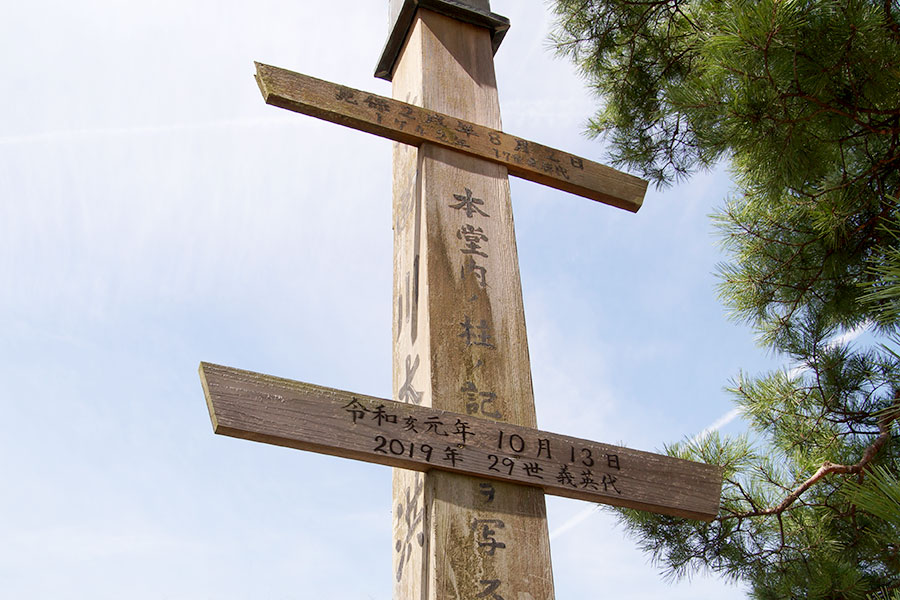 Myoshoji Temple is located about 150 meters from the collapsed embankment, and the building was completely destroyed.The chief priest's wife, Myone Sasai, recalls witnessing the precincts flooding as the water overflowed. She said, ``There have been floods in this area many times.The embankment broke at dawn.She huddled on the roof and could hear the muddy water rushing in from the sound of the building collapsing, she said. 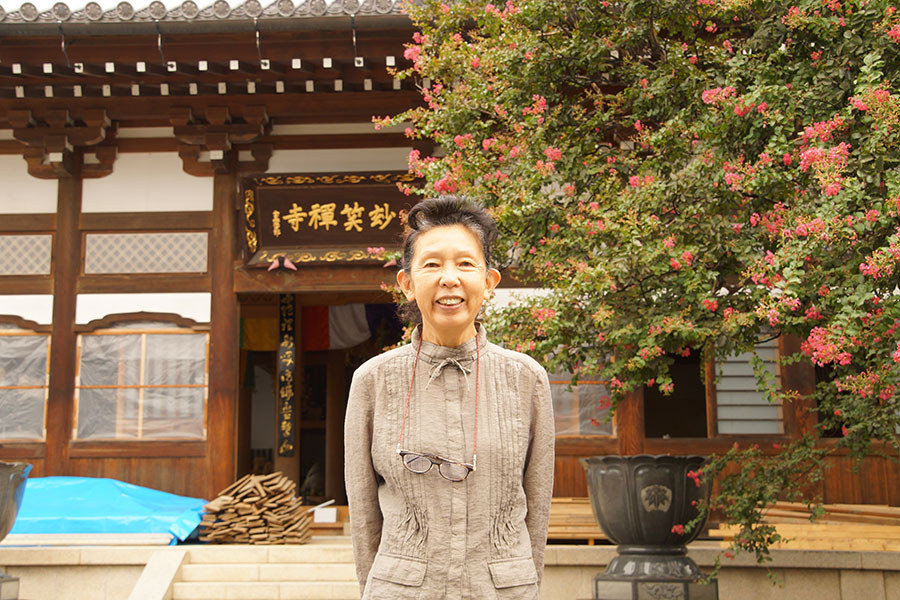 Three years have passed since Typhoon No. 19 caused great damage.The main hall is still undergoing restoration work.
Mr. Sasai is also the chairman of the Naganuma History Study Group, which was set up by volunteers who wanted to learn more about Naganuma Castle, the history of the region.In June of this year, together with the members, we published a collection of records, "Chikuma River Embankment Collapse", which was compiled from the perspective of residents.In addition, we are doing various activities such as holding events at turning points and making picture postcards. “Memories fade, and people forget about them. What we need to convey has no choice but to do it over and over again. Disaster Tradition Cards are one of them,” he says.

I took a picture of the Chikuma River Flood Marker and went to the Nagano Construction Office in the Nagano Joint Government Building to get a card.It's a little strange that what I've seen with my own eyes is on a card, and the data is compactly organized. 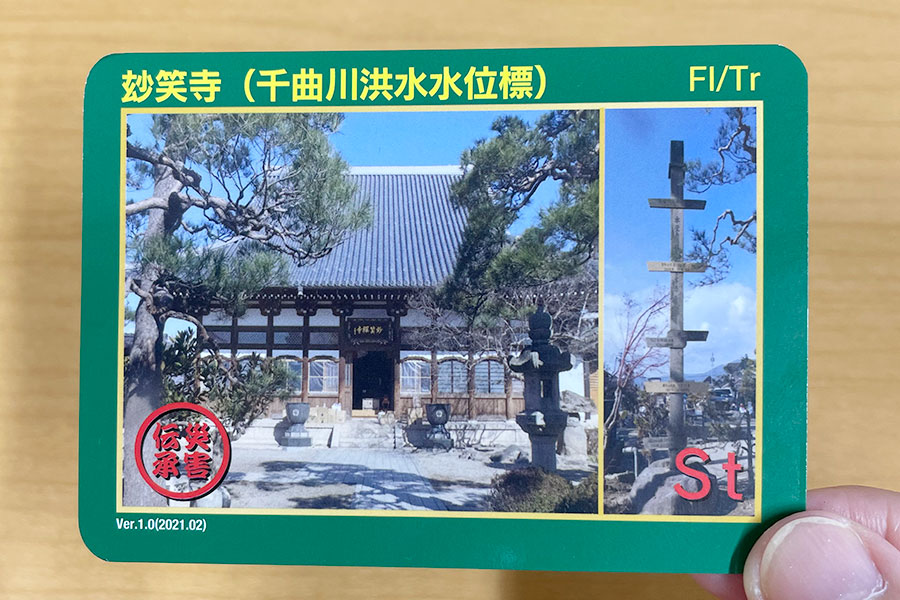 There may be cards in your immediate surroundings that give you an opportunity to learn about things you haven't noticed before.A small card that fits in your hand.Please touch the wishes put in it and think about it.

There are more!Publicly distributed cards created by Nagano Prefecture, etc.