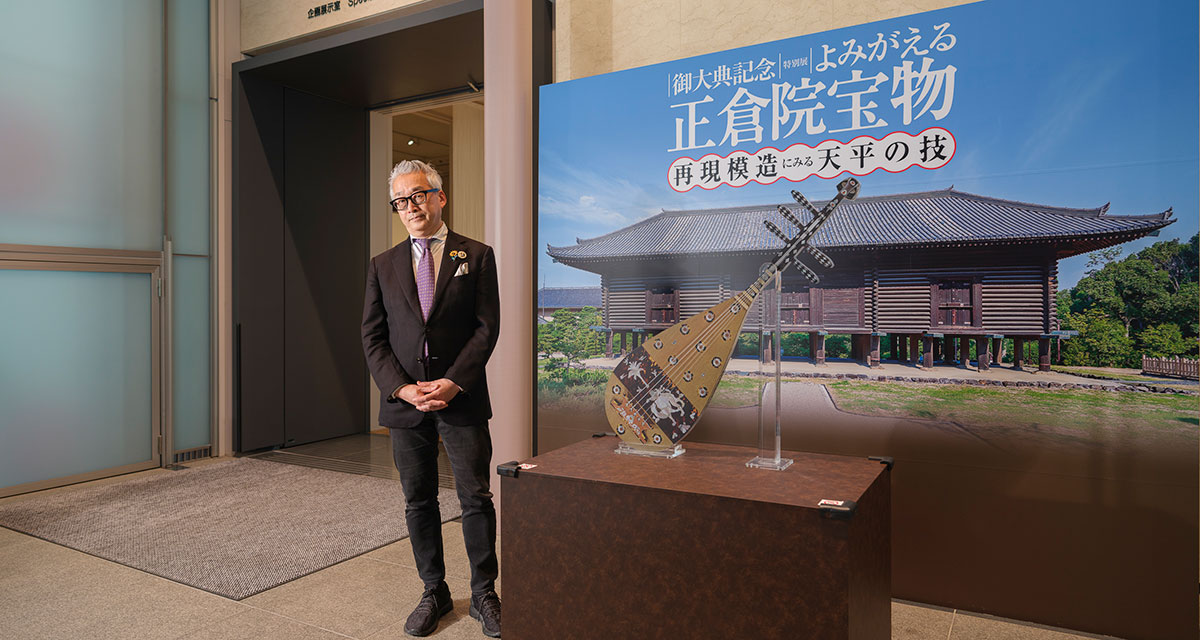 The Matsumoto City Museum of Art was reopened on April 20, 4, celebrating its 2022th anniversary.
After about a year of large-scale renovation work, the renovated facilities, the "Parco de Museum" that was held while the museum was closed, and the renewal commemorative exhibition "Reviving Shosoin Treasure-The Technique of Tenpyo in Reproduction Imitation-" We asked Director Minoru Ogawa about the charm of.

A comfortable space for both the work and the visitors

The two main points of the renewal are "preservation of works and improvement of the environment of the exhibition room" and "comfort of visitors".In the special exhibition room, we introduced LED lighting and spotlights that can finely adjust the illuminance, and updated the air conditioning equipment. A new "Baby Rest Room" with a nursing space and a diaper changing space has been set up on the 2st floor, and the "Art Library" on the 1rd floor has a space where you can take off your shoes and read a book slowly.Director Ogawa explains this as follows.

"The air-conditioning equipment that controls the temperature and humidity to store the work will need to be inspected and replaced after about 20 years. At the same time, we replaced the lighting related to how the work is displayed. Nowadays, one of the keywords is that children can have fun in any museum. We have reviewed the "Baby Rest Room", "Art Library", etc. so that children of the child-rearing generation can easily visit. "

In addition, the entrance has been redesigned to support cashless payments.A new cafe / restaurant "SHOKUDO & CAFE yumyum" has opened.

At the "PARCO de Museum" held at the commercial facility "Matsumoto PARCO" in Matsumoto City during the renovation work, the works of 12 local artists were exhibited for eight months for four periods. (The state of the exhibitionYou can see it in this video. ) 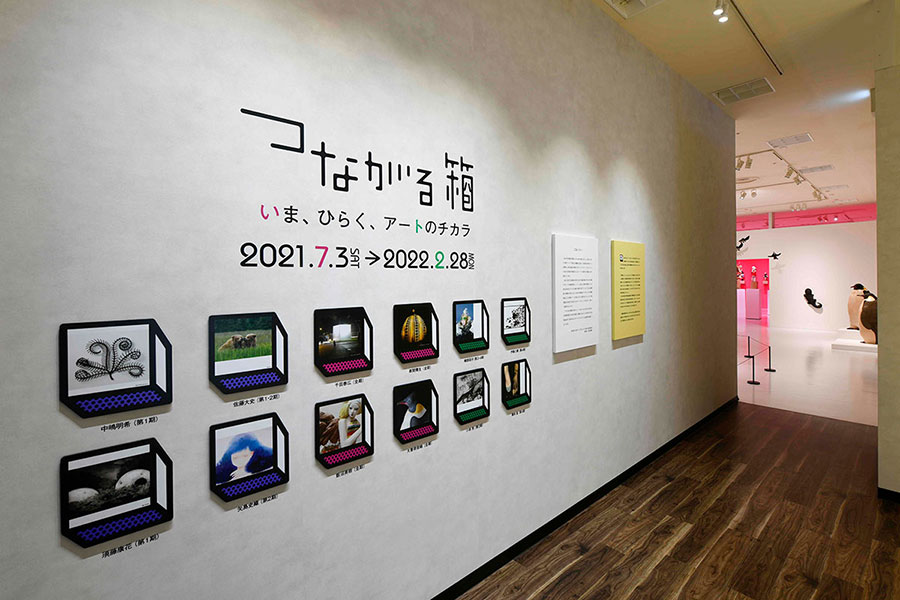 The fact that one floor of a commercial facility was likened to an art museum and the affordable admission fee of one coin was a novel project that was rarely seen anywhere else, but Director Ogawa positions it as an "extension of past activities."

"Introducing local artists and artists who are currently active is something that should always be done at the museum, so I think that I moved to another place while the museum was closed. By using a place called "Matsumoto Parco" where younger generations gather as a venue, we were able to provide an opportunity for those who have never visited the museum to come into contact with the work. I think it was very good. "

The museum exhibits works by Yayoi Kusama, a world-famous avant-garde artist, both inside and outside the building.As a public modern art museum, it plays a role in contributing to the promotion of the arts and culture of the citizens, and at the same time, collects and exhibits the works of people who are related to modern art that began in the Meiji era. It also plays a role in providing a place for expression. 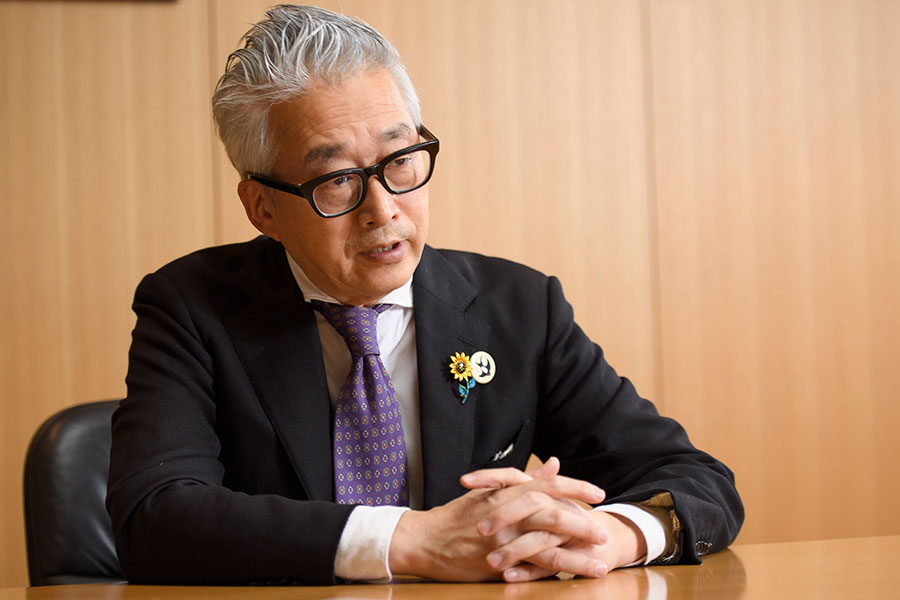 "It is an important cycle to research and research, collect excellent works, and connect them to exhibitions. In addition, I would like to highlight the people who are currently active. For example," Parco de Museum " However, the sculptor Hideki Iinuma from Matsumoto City, who I introduced, held a special exhibition in 28. Since the world is constantly moving, the world of art is not limited to the past, but to the future. As a contemporary sculptor, I have to go, not to mention Mr. Yayoi Kusama, who is still trying new things, but I am also working with the people of the generation below that in mind. "

In addition, one of the roles played by public art museums is to support learning as an educational dissemination facility.On the day of the interview, Director Ogawa himself held a "slide talk" explaining the highlights of the exhibition and how to enjoy it.It has been difficult to hold the event due to the corona crisis, but it seems that it will be gradually resumed in the future.

Reproduction imitation is a baton for the future

To commemorate the reopening, the "Grand Order Memorial Special Exhibition Revived Shosoin Treasure-Tempei's Techniques in Reproduction Imitation-" (April 4st to June 21th).Shosoin treasures are items that were handed down to Shosoin Shosoin, which was the storehouse of Todaiji Temple in Nara, and cover various fields such as furnishings, musical instruments, play equipment, weapons / armor, stationery, and documents.Currently, I rarely see it except for the "Shosoin Exhibition" held in Nara once a year to check the treasures.

It is said that the imitation production of Shosoin treasures was started at the "Nara Expo" held in 8.Since the latter half of the Meiji era, imitation production has been undertaken as a business integrated with repairs under the Imperial Household Shosoin Imperial Treasure Arrangement.Currently, the Imperial Household Agency Shosoin Office focuses on reproducing the original appearance using the same materials and techniques as the original treasure, not just imitation.In this exhibition, about 1875 selected works from the reproduction imitation works produced so far are exhibited. 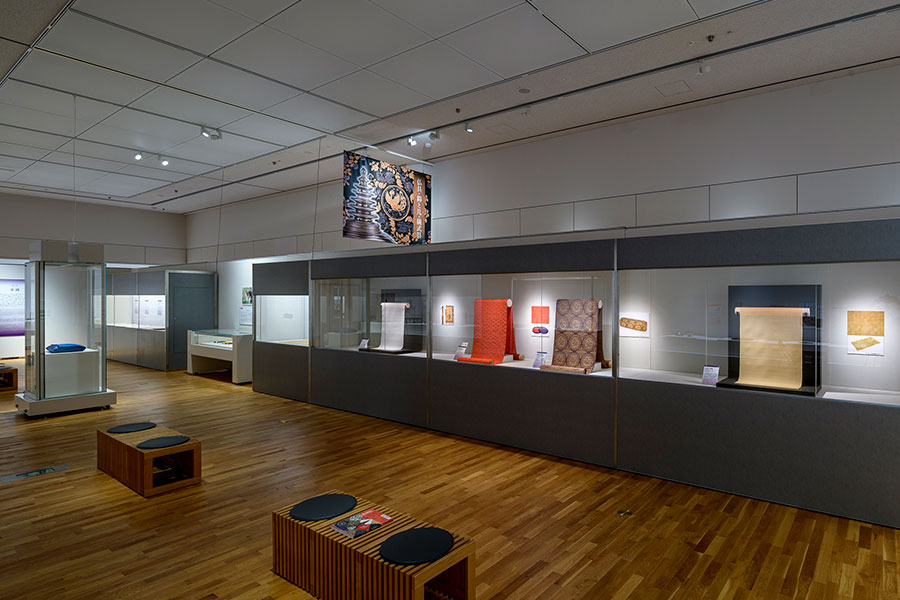 "It is easy to misunderstand that there is no Shosoin treasure itself, but it is different from substitutes and replicas. It seems that there are quite a few Shosoin treasures that were restored in the Meiji era. But without it, such a reproduction imitation might not have been possible in modern times. "

What impressed me in the "slide talk" mentioned earlier was the words of Director Ogawa, "Copying is a relay to the future."For example, the photo used for the posters and leaflets this time is "Raden Raden no Gogenbiwa".In the first half (until May 5th), the "second generation", which was owned by the Imperial Household Agency Shosoin Office and was manufactured over about eight years from 15, will be exhibited, and the second half (until June 23th). The "first generation" produced in 2011, which is owned by the Tokyo National Museum, is on display. 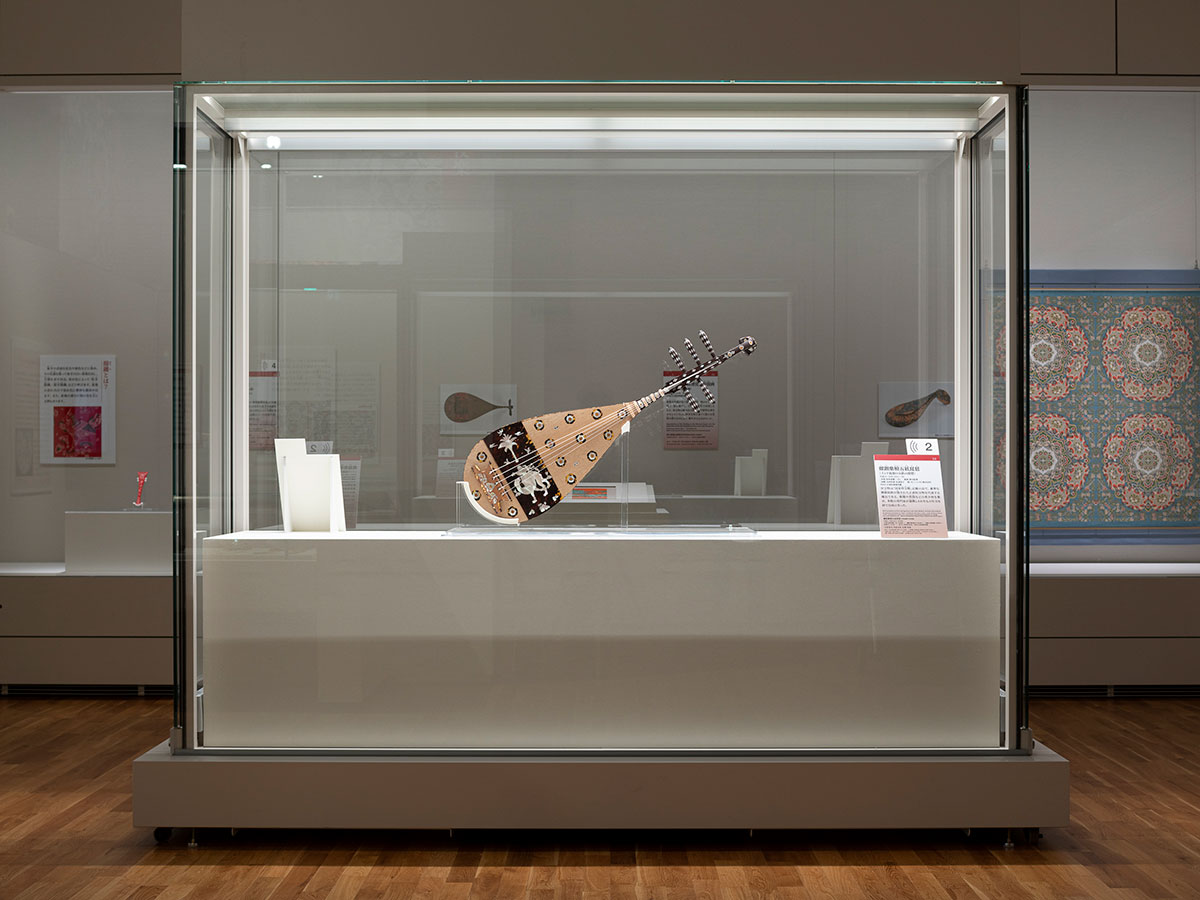 "I was able to make a" second generation "because there was a" first generation "that repaired the damaged original. Unfortunately, I can't compare the two side by side, but when compared, the first generation is said to be loose. Or, it's easygoing, and the second generation feels elaborate. The way of thinking about imitation also differs depending on the times. In the past, it was exported as a product to foreign countries, so it was made with a rough interpretation. I think that it was done, but now it is also regarded as one of the scientific research results. It is not that which is better, but that it is different in each era. Maybe 2 A "third generation" may be created in a year. "

Considering that the accuracy of research on the shape of the original treasure, the materials used, and the technology will increase with the progress of science, it can be imagined that the reproduction imitation will change with the times.The exhibition will explain the materials and techniques, as well as show how modern craftsmen are trying to make them. 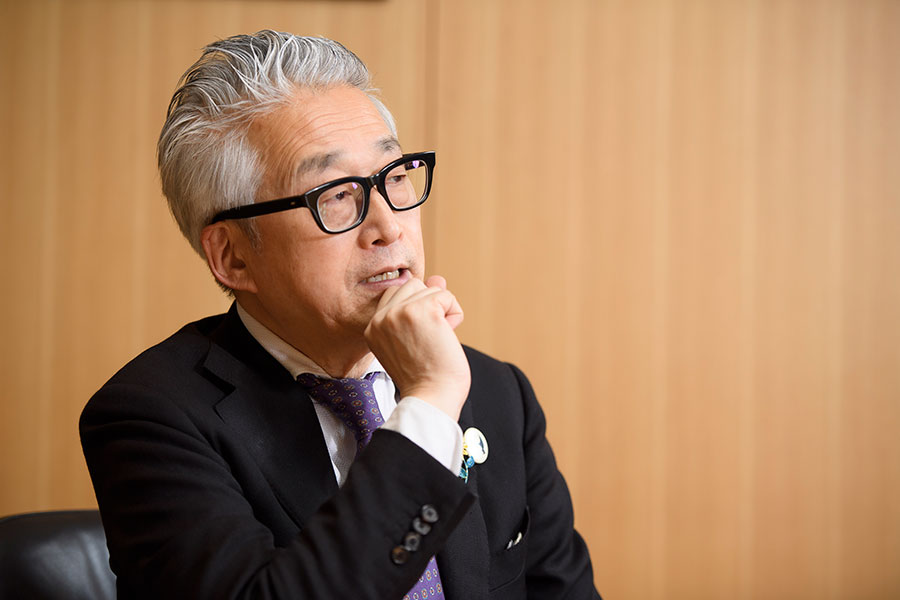 "By paying attention to when and who made it, I think you can also touch on the idea of ​​imitation at that time. I also want you to see the inheritance of technology, the second and third generation of craftsmen in the Meiji era. However, I am involved in the production of the current reproduction imitation. It can be seen that young craftsmen are trying to use the techniques of the time or replace them with modern techniques to make them their own. "

Director Ogawa dared to mention "all the highlights" is the "Kongyoku no Obi" and the "Raden Gyoku Taibako" that is said to contain it.The original treasure decorated with lapis lazuli is said to have been made with reference to other leather obis that have been handed down to Shosoin because the obi was torn and partly missing.The box has a gorgeous atmosphere with karahana, clouds, and bird patterns.

"I understand that not only the belt (belt) but also the box to put it in was important. I feel the Japanese" box culture "here. So to speak, Shosoin itself is big. It is a treasure box that not only holds and stores boxes and works, but also delivers them to future generations. I liken museums to boxes, and I think that it is part of our mission to correctly pass on works to the future. 20 The year is still young as a museum. I want to continue what I have done so far and take on the next challenge without being caught up in it. "

The exhibition is a traveling exhibition held at eight locations nationwide, and the final venue will be Matsumoto.Around the same time that the "Nara Expo", which can be said to be the origin, was held and the imitation production was started, the former Kaichi School building was completed in Matsumoto City (Meiji 8), and the castle tower of Matsumoto Castle where the Lord disappeared was preserved.・ There was a big event such as the citizens collecting donations for repairs and starting construction (Meiji 9).Director Ogawa said, "I think it makes sense to hold the event in Matsumoto, a castle town where craftsmanship is alive."

During the exhibition period, a craft-related project "May of Crafts" is being held in Matsumoto City.Why don't you come and experience the techniques and traditions, the careful handiwork, and the thoughts put into the work. 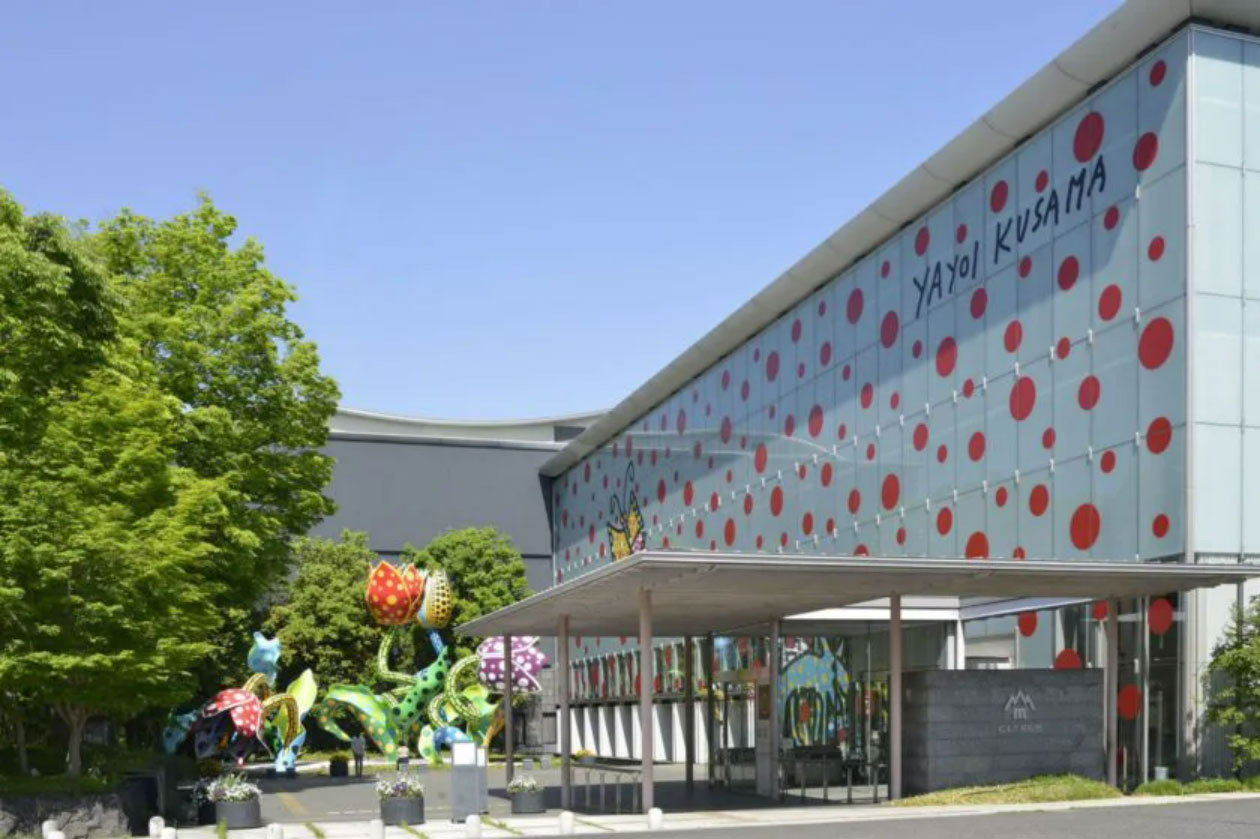