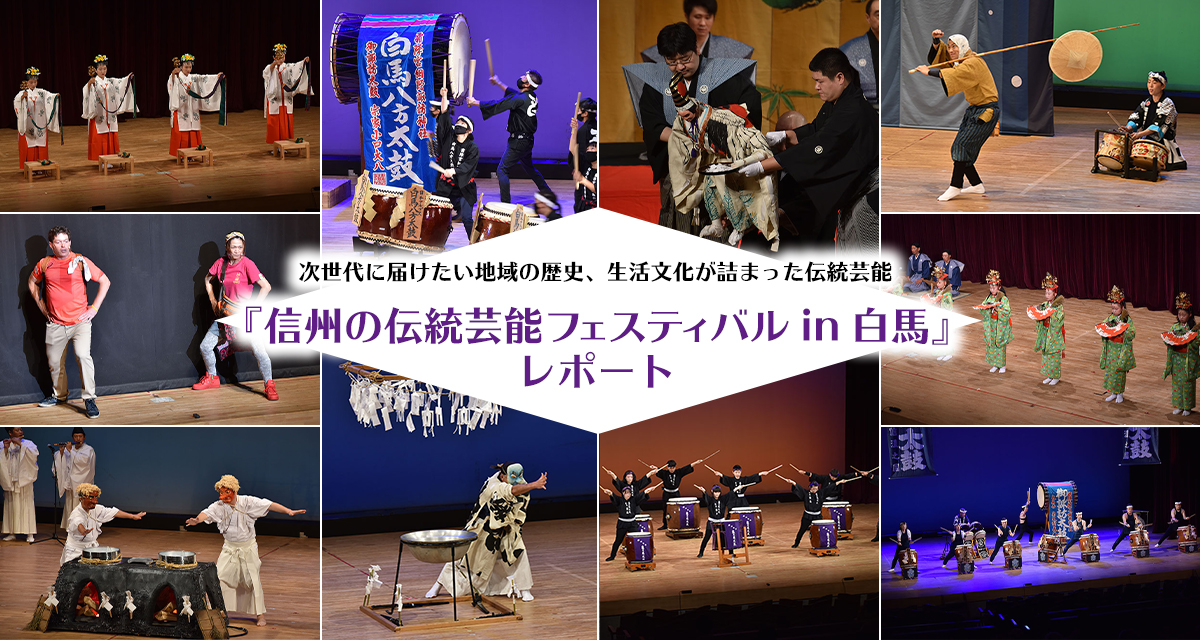 "Shinshu Traditional Performing Arts Festival in Hakuba" was held at Hakuba village "Wing 3" on August 2021th (Fri) and 8th (Sat), 6.This is part of the Tokyo 7 NIPPON Festival co-sponsored program "Shinshu Art Rings-Connecting with Culture. Creating Culture. And Towards a Beautiful Future-", such as Kagura, drums, and puppet shows that have been passed down from ancient times in Nagano Prefecture. It was an event where you could experience the charm of traditional performing arts.
In this special feature, we will deliver the state of this event.

The Olympics and Paralympics are both a "sports festival" and a "cultural festival." Its importance is also noted in the "Olympic Charter."At the Tokyo 2020 Games, an official cultural program will be held nationwide from April 3, 2021 to the beginning of September, led by the Tokyo Organizing Committee for the Olympic and Paralympic Games. It is "Tokyo 4 NIPPON Festival".

In Nagano Prefecture, as a co-sponsored program of the festival, we are implementing five programs under the name of "Shinshu Art Rings-Connecting with Culture. Creating Culture. And Toward a Beautiful Future", one of which is Nagano Prefecture Art and Culture. It is "Shinshu Traditional Performing Arts Festival in Hakuba" sponsored by the association. 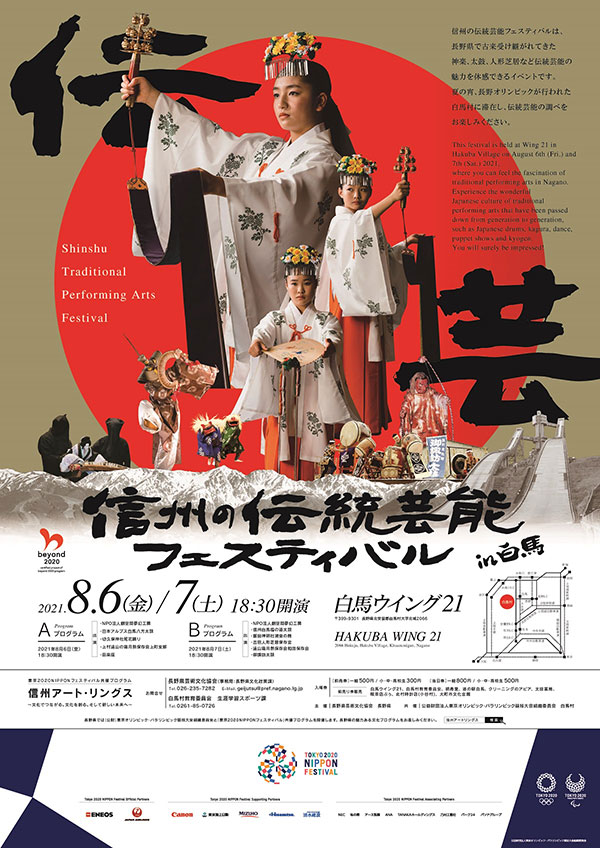 In Nagano Prefecture, where the 1998 Nagano Olympic and Paralympic Games (hereinafter referred to as the 1998 Winter Olympic Games in Nagano) were held, "Shinshu Art Art" aims to inherit the legacy and disseminate the culture of Nagano Prefecture with the Tokyo 2020 Games as an opportunity. Each cultural program of "Rings" is held.

The venue for this event was Hakuba village because the ski jumping competition and alpine competition were held in the 1998 Winter Olympic Games in Nagano.A photo of the ski jumping platform was incorporated into the poster design of the event, and the logo mark of the 21 Winter Olympic Games was installed on the wall of the facility at "Wing 1998" at the venue.
This also conveys the concept of this event, which aims to convey the charm of Nagano Prefecture's abundant traditional performing arts, with the Tokyo 1998 Games as the foundation, based on the legacy of the 2020 Nagano Winter Games. 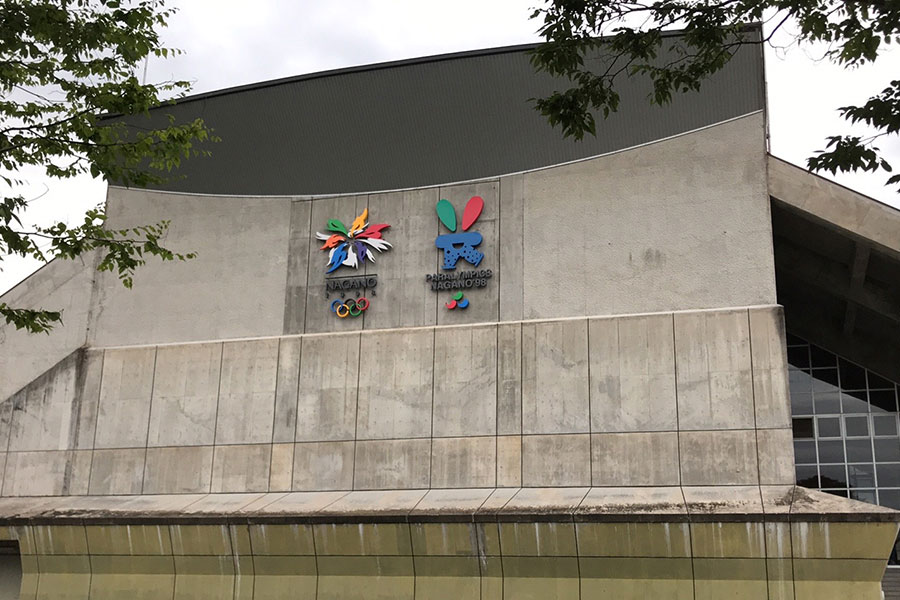 Logo mark installed on the wall of the facility

Hikaru Matsuyama, chairman of the Nagano Prefectural Arts and Culture Association, who is the organizer of this event, said: 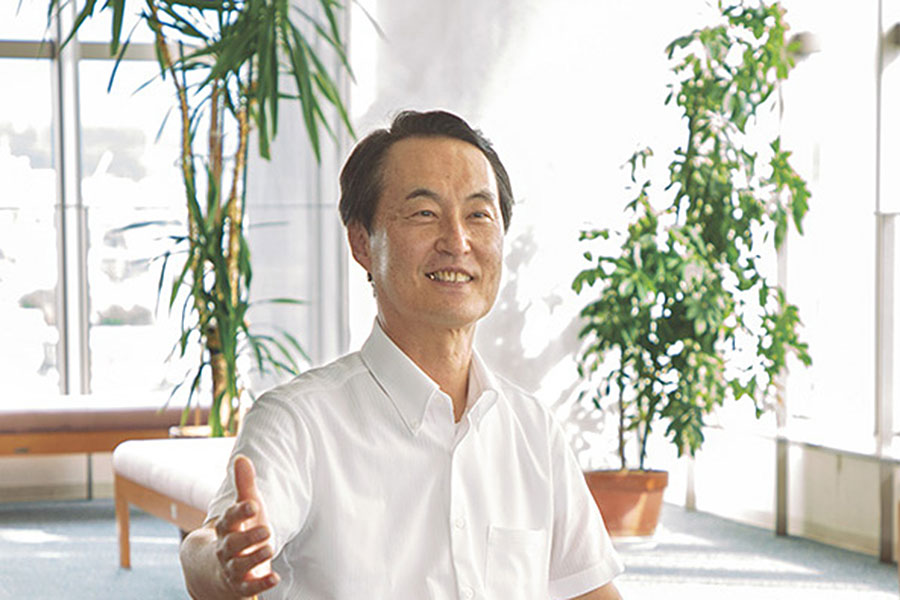 Shinshu's traditional performing arts, where you can see the diverse personalities of each region within the same "Mai" and "Taiko"

The opening of the stage.A video introducing the beautiful mountains, tourist attractions, hot springs, food culture, etc. of Nagano Prefecture will be played, and the MC will announce the opening of the event.
Then two actors appeared on the stage.One is Allen, an American who loves Japan, and the other is Rika, a Japanese who met Allen on SNS.With the setting that Rika will introduce traditional performing arts to Allen, the two will visit traditional performing arts in various parts of the prefecture, starting with Hakuba village.Allen and Rika sometimes talk with the performers, surprised and impressed, and convey their characteristics to the audience.This script, which is the base, was directed by Mr. Matsuyama and the late Takeji Otsuki, the former chairman of the Minowa Arts and Culture Association, and directed by Yuri Aoki, the director of the NPO Drama Space Mugen Kobo. 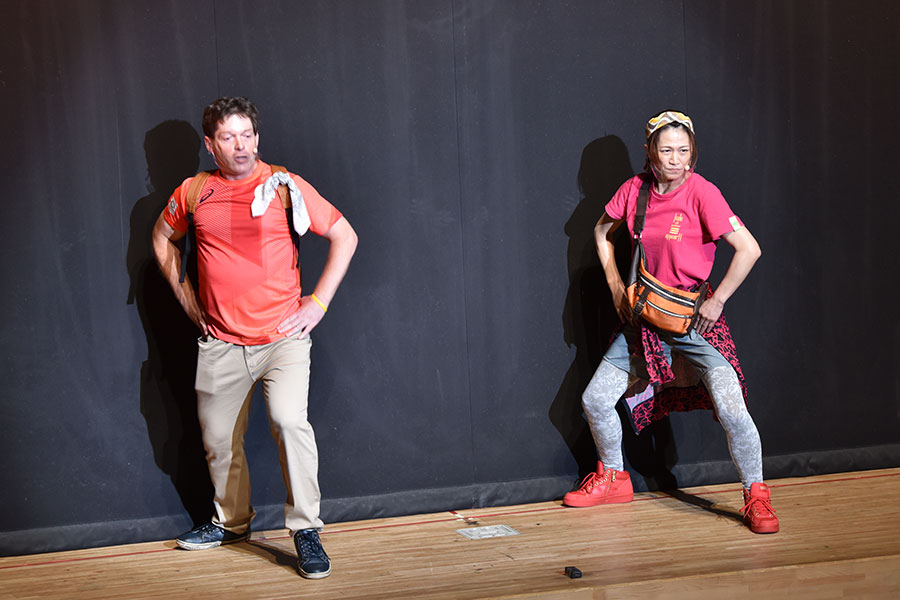 The Japan Alps Hakuba Happo Taiko Preservation Society has been active since 53 based in the Happo district of Hakuba village.On this day, three songs were performed by a child-centered player.The children running around the various drums that are struck vigorously while choreographing the drumsticks to the side and ringing the shrine maiden bell (Mikosuzu) and the clapping tree (Hyoshigi) are also in the powerful performance. It had a warm atmosphere.

Kirikubo Shrine Obana Odori is a dance dedicated to the annual festival of Kirifurimiya Kirikubo Suwa Shrine, which stands beside the Hakuba Iwatake Ski Resort.Ten children of the Kirikubo Shrine Obana Odori Preservation Society, wearing a calm green kimono, a red belt, and a large crown, performed a Japanese fan in their right hand and a Japanese pampas grass in their left hand to match the song. I danced gracefully with Obana). 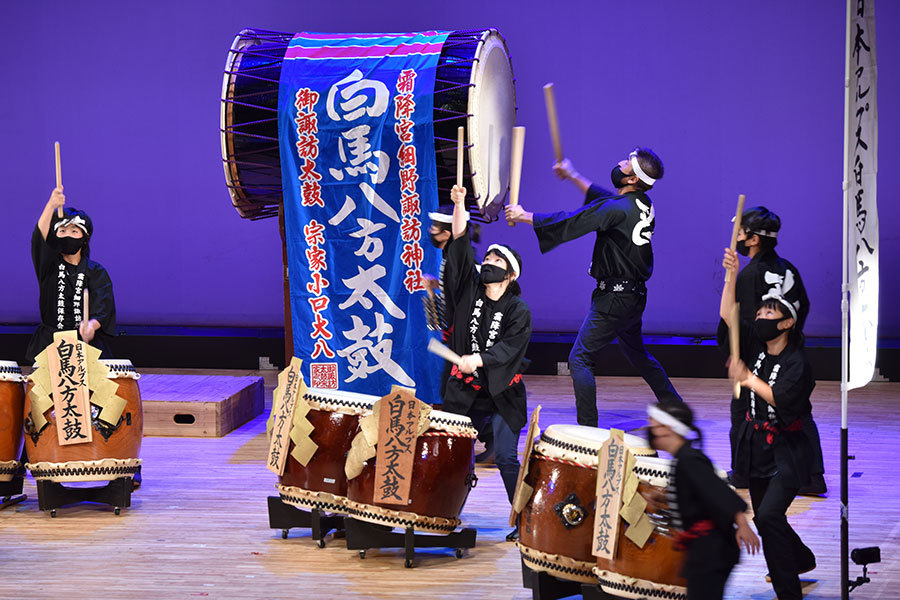 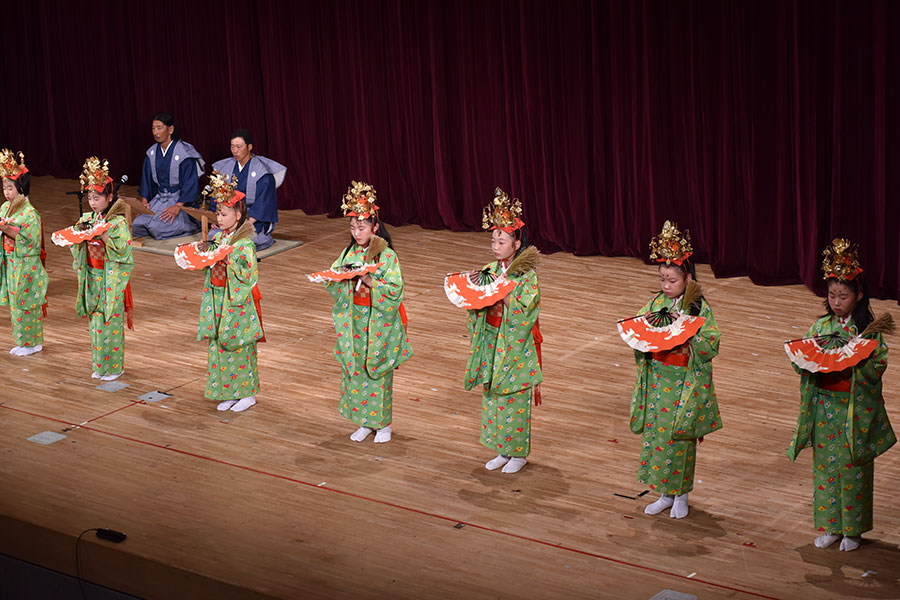 The Uemachi Branch of the Shimotsuki Festival Preservation Society of Uemura Toyama performed three dances such as "zelkova dance" (zelkova dance) on the sound of drums and flutes in front of two rods (models) unique to the area. ..The movement of folding the body deeply and raising the hand holding the fan high made me feel the strength even in the restricted posture.There was also a scene in which a dancer wearing a tengu mask, the true value of Yutate Kagura, splashes boiling water with his bare hands.

After a break, Tarakuza, who is developing a creative stage based on drums, songs, and dances that have been handed down during festivals and annual events all over Japan, appears.A bright and fun performance that will change the solemn atmosphere of the past.With commentary, "Kiso Kiyari" (Kiso Kiyari), Shiojiri City's "Stage Hayashi" (Butaibayashi), Kiso's "Tori Sasashi", "Shishimai" (Shiojiri), the original song "Yama no It was followed by "Ohayashi" (Yama no Hayashi). In "Torisa-sashi", a man with cheeks, who tries to catch a bird by attaching a birdlime to a long bamboo pole, but struggles with a sticky rice cake, invites a big laugh. rice field. 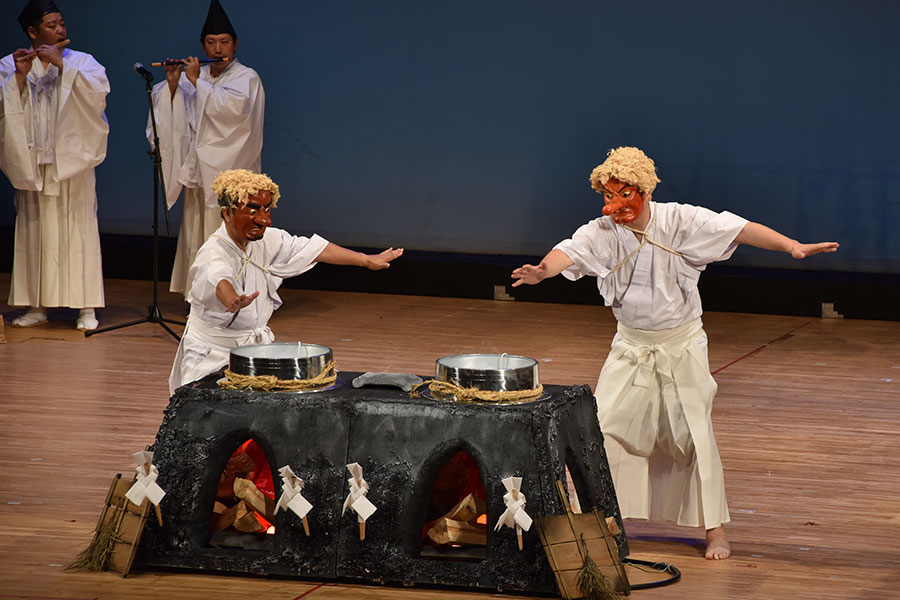 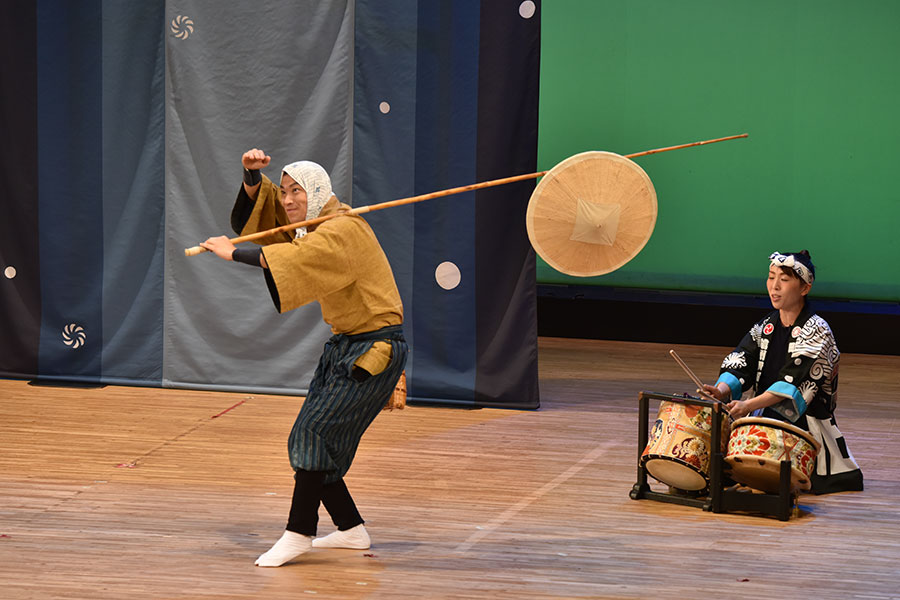 Shinshu Hakuba The Salt Road Taiko is an organization established in 9 to regain the liveliness of local festivals.A wide range of ages, from children to adults, took turns playing. Through the performances of "Children's Festival Hayashi", "Kaido Niryu", and "Rising Dragon", he showed various expressions of taiko.

Iida Shinmeisha Urayasu no Mai consists of a fan dance and a bell dance by four shrine maidens, which was planned for a special celebration festival at shrines nationwide in 15. The dance that was done.Iida Shinmeisha Urayasu's dance was suspended for a while after the war, but it seems that it has revived in recent years.Girls wearing white and vermilion costumes danced solemnly.I was impressed by how he twisted his wrist to ring the bell and freely manipulated the colorful belt attached to the bell. 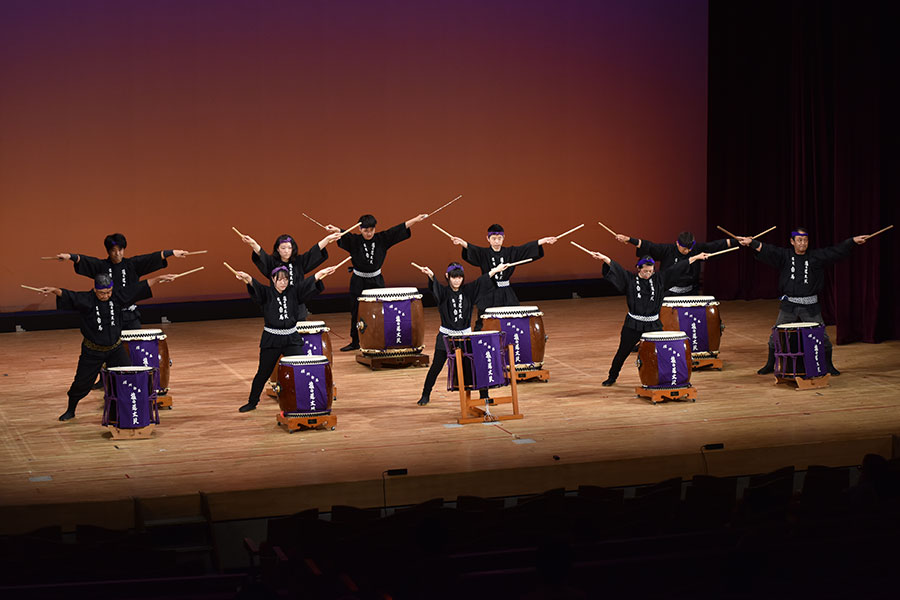 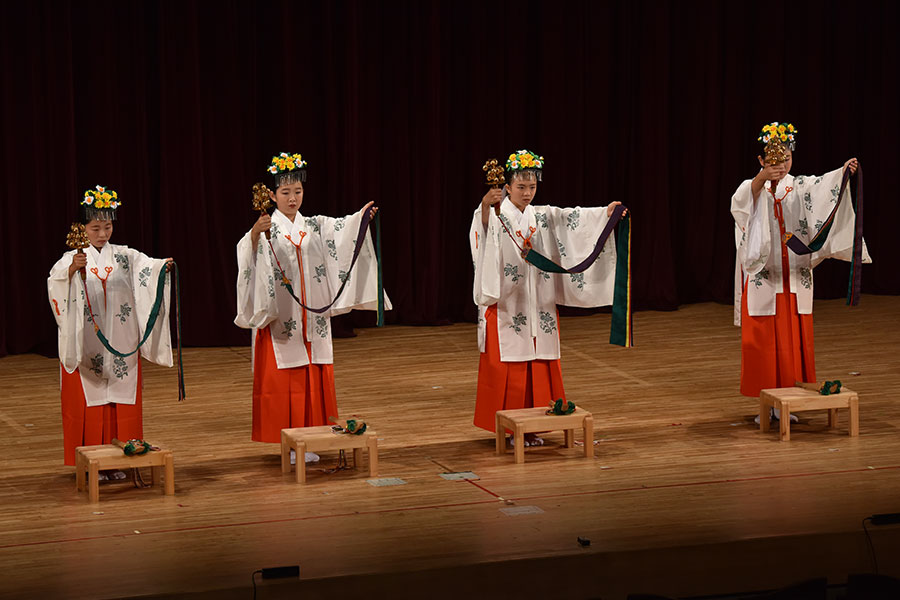 The Furuta Puppet Theater Preservation Society, which is said to have been handed down since the Kyoho era (1720s), performed a celebration dance "Sanbaso" in a three-person puppet show.I was impressed by the slapstick that makes a sound by striking two clapping trees on a thick board according to the footsteps of the doll, mixed with various drums and flutes. 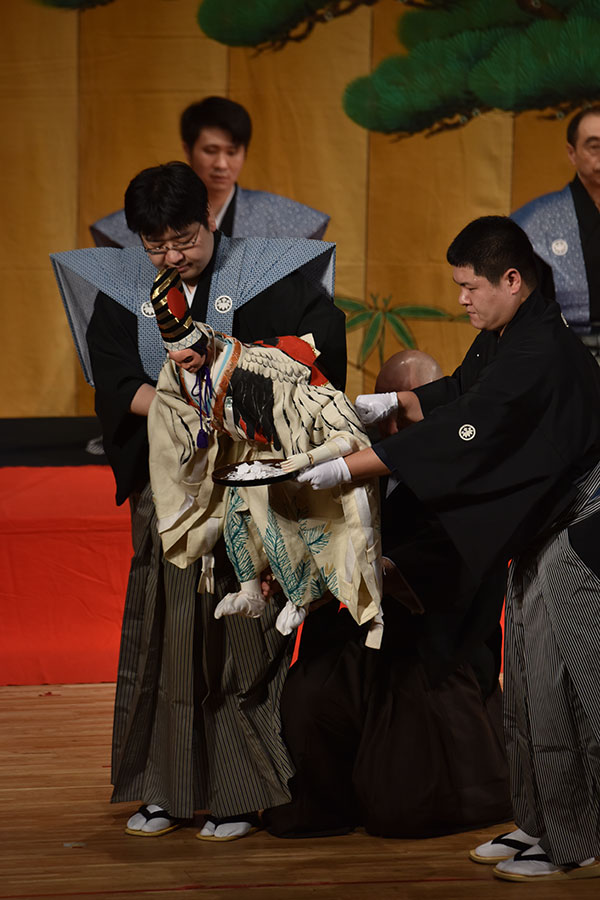 Toyama Shimotsuki Festival Preservation Society Wada Preservation Society is a performance of only drums, and is performed only by drums. (Kasumi) and dynamic and intense dances were performed one after another.They performed entertaining dances, such as a dance in which the rhythm of the drum, which was slow at first, gradually became faster, and a dance in which unique facial expressions (King of Fire, Suwa Myojin, Yama-no-Kami, etc.) appeared one after another.The same is true for the Uemura Toyama Shimotsuki Festival Preservation Society Uemachi Branch, which showed a dignified dance. I did.

And the big bird for two days was Osuwa Daiko.Its origin is said to date back to the time of the Battle of Kawanakajima during the Warring States period, and the late Daihachi Oguchi, a soke, revived the place that had been cut off from the Meiji era to the 20s. ..This is "Yukoma Tonbane Taiko" (Yukoma Tonbane Daiko), "Hiryu Sandangaeshi" (Hiryu-san Dangaeshi), and "Suwa Ikazuchi" with veteran members. The performance of) was solemn and powerful. 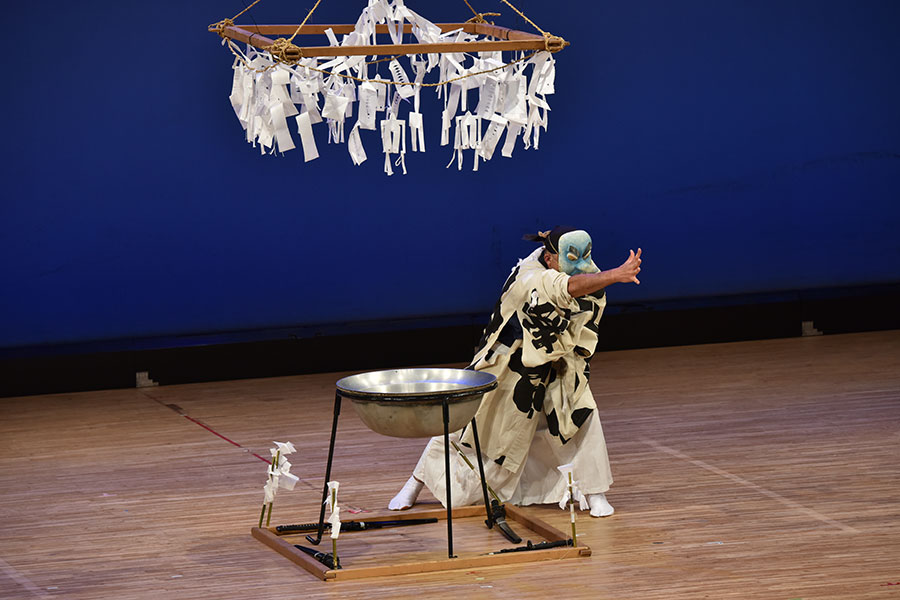 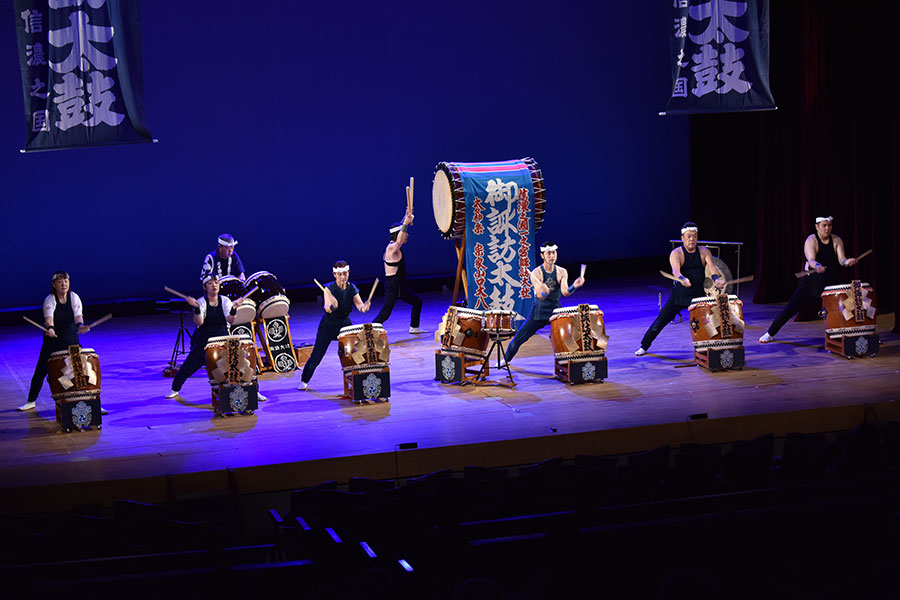 The audience, where men and women of all ages gathered, gave a big applause to conclude this event.

Actually, not only the children who participated as performers but also many children who would have come with their families were watching in the audience seats.Many traditional performing arts and Mr. Nakayama's words mentioned above must have been deeply engraved in your heart.

The state of "Shinshu Traditional Performing Arts Festival in Hakuba" will be released online at a later date.Please take a look at the traditional performing arts that performed at this event in Corona, where the chances of viewing have decreased.

Shinshu Art Rings-Connected by culture.Create a culture.And to a beautiful future ~
Including the "Shinshu Traditional Performing Arts Festival in Hakuba" introduced, Nagano Prefecture will carry out five cultural programs as a co-sponsored program of the Tokyo 2020 NIPPON Festival.Please enjoy the charm of Nagano Prefecture's diverse cultural arts.